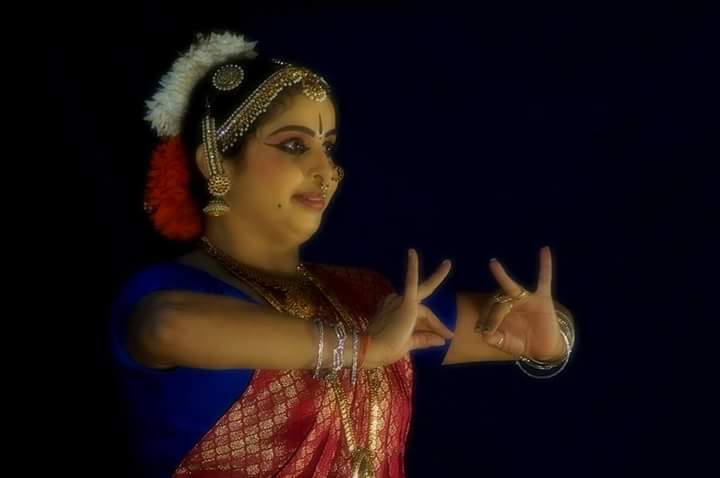 Mrs. Radhika Kalluraya, a familiar name in the southern part of Karnataka as an exponent of Bharathanatyam, hails from a small hamlet of Sullia Taluk in Dakshina Kannada District. Born to Shree Srikrishna Deva Poojathaya and Smt. Vasanthi Amma, Radhika carried from her very childhood, the cultural essence that is required for a classical artist. Even as a young child, she showed immense talent in both dance and music. In fact, her mother Vasanthi Amma, a vocalist herself, became her first Guru in Karnataka Music.

Exhibiting huge talent and interest in dancing, Radhika walked into the beckoning world of Classical Dance at the right age. It was Sri Balakrishna Manjeshwara of Natyanilayam who honed her artistic abilities. She passed her Junior Exams in 1994 and Senior in 2000, but even before passing her Senior exams in Bharathanatyam, she had made her debut (i.e. in 1998) at Puttur, winning accolades from one and all. Subsequently, she had been pursuing her higher studies under the guidance of internationally acclaimed artist, Dr. Sanjay Shantharam.

Traditional to the core, Radhika has been striving to reveal the innate grace, beauty and harmony that exists in this divine art form, through her performances. Experts say, she is all set to make an indelible mark in the field of art.

Mrs. Radhika is a versatile artist. Apart from classical dance, she has made forays into instrumental music. She received ‘A’ Grade Award in the State Level Violin Competition held in Kerala. She has studied Karnataka Music under the tutelage of Vidwan Vellikoth Vishnu Bhat and has acquired sufficient proficiency in violin. Learning and constant up-gradation has been Radhika’s hallmarks.

Her creativity, imagination and emotional experience conjoin to make it a spectator’s delight when she performs on the stage. Mrs. Radhika has already given more than 1000 stage performances in places spread all over India. Raghavendra Aradhana at Mantralaya Kalahashi. Kannada Sangha Mumbai, Kannada Sangha Delhi, Trissur, Calicut, Thiruvanantapuram and Kukke Subramanya during Kiru Shashthi have brought her acclaim and have won her favourable critical reviews from the media.